I am sure this title has been used a dozen times in discussion of graffiti but I really mean it. I, along with the ancient graffiti artists, am only scratching the surface and this is not intended as a scholarly investigation on graffiti; just a brief muse on the subject as I have witnessed quite a lot recently, scored onto the surface of ancient monuments in Sudan. Perhaps this is more a name and shame than anything else.

I hate modern graffiti though am full of contradiction as I adore ancient Roman graffiti and have spent time researching the scribbled messages on the walls of the Roman houses in Pompeii that I am studying for my PhD. The often rude and jovial comments etched on the walls of the houses are a wonderful way to connect with the people who once inhabited them. So it’s basically modern spray paint scrawls I disapprove of.

But the abhorrent modern use of ‘tagging’, just as writing your name in full, is a way to leave your mark. Why do any of us feel the need to carve our names onto trees, scratch them onto wooden school desks or spray it on a railway bridge? All we are doing is defacing something and in essence leaving the one clue as to who did it: our names. Why does anyone have an urge to leave a trace of their name for everyone to see and often in a place that will be seen for generations to come? I freely admit that I am guilty of having this urge but I can confess that writing my name in huge letters in a sand dune or scratching it onto the mud section of a trench I dug in Pompeii shortly before it was back filled, feel less permanent than carving a name into stone. The wind blowing over the dune will have erased my name after a few days. But I still did it and I am not entirely sure I can answer why I had a desire to see my name written in a place where others could see it.
It must be something about leaving a mark and wanting others to recognise that you have been there, that you exist and that you will continue to exist in some form as long as the indelible mark is visible. I am sure others have written about this concept in detail but as I said, I am only thinking aloud.

What brought this on was a person called J. Hogg. J. Hogg has not written a seminal paper on the subject, no, they simply carved their name in neat little letters on a perfectly carved stone column drum in the Temple of Tuthmosis III at Soleb in Sudan.

J. Hogg’s presence felt in the Temple at Soleb, Sudan.

I was busy trying to find an angle to take a photograph and was aware of the delicate reliefs adorning many of the walls of the temple. I wanted one as a foreground object in the shot. This is how I met J. Hogg. Whoever J.Hogg was, they felt the need to emblazon the column with their name and leave it as a sign that they had once stood precisely where I was standing and had patiently scratched away at the stone.

J.Hogg was not alone in this act and there were others who had defaced the temple, in a bizarre way, mimicking the beautiful cartouche of the ancient Egyptian Pharaoh, Tutmosis III. The classic ‘I woz ‘ere’ statement. The only decent thing J.Hogg did, if we are looking for a positive here, was choose a plain section of the column drum. Small mercies.

On arrival in Khartoum and a visit to the National Museum of Sudan I was struck by the sheer number of recent names that were scored onto the reconstructed temples on display. Given that I am an old romantic at heart, an archaeologist, whose purpose it is to reconnect with past, and as I have said, full of contradiction, there is an inexcusable tiny part of me that gets excited at the connection with, and identification of, another human being. So for a brief moment I find myself captivated by J. Collinson who was evidently at Semna Temple in 1894. I have an immediate simple image in my head of a male traveller (in a totally sexist way I am assuming each of my rogues, are men) wearing a breezy white shirt that has turned a little yellow from the sand and khaki jodhpur type trousers. I am probably not dressing him fashionably correct for 1894, I am giving him a romantic Engish Patient-type desert adventure garb. Oh, he has a pith helmet too. All my 19th century graffiti artists have pith helmets which are usually slumped over their leather satchels whilst they sweat profusely and wipe their foreheads as they carve their names.

The mental image gets somewhat more complicated when I meet Augusto Diamanti who had spent a fair amount of time at Semna Temple, given the elaborate inscription he carved onto the exterior of the temple on the 28th of October 1849.

The name can only be Italian and so is the spelling of October as “Ottobre” so that confirms, that. Being an Italian traveller, I imagine him as more flamboyant than J.Hogg and J.Collinson and certainly his ridiculously complicated carving would suggest his slightly eccentric manner. Perhaps someone can decipher what the exact meaning of his script means but to me it looks as if he is learning words and their endings. A hell of a way to remember them – to spend ages carving them into a Nubian temple. I half want to imagine that he is actually the excavator of the site and this list was meant to last the longevity of a dig season as a constant reminder – hence the elaborate nature of it. It seems a lot of work to casually walk away from.

I was then struck by the number of individuals that had blatantly identified themselves by etching their names, not on blank stones, but across the ancient reliefs. Really quite astounding: the sheer audacity of the graffiti artists thinking that their name, millennia after the stone had been laid, was more important than the delicate carvings that adorned the surface. Yes, Mr Downey, I am looking at you.

And Mr Achmet, you shouldn’t feel too smug either. Single handedly, quite literally, you have ruined this glorious light relief that you must have travelled a fair distance to see.

And that I think is where I have the biggest problem. These travellers ventured out into the wilds of the desert in the 19th century to marvel at the wonders that these temples offered and then thought the best course of action was to deface the beauty they had enjoyed by applying their name to it. I simply cannot marry the desire to visit a site, and one that cannot have been easy to reach, and think “I know, what this monument, with some of the most serene ancient art needs is my name emblazoned across it.”

And I know there there could be more than one Holroyd travelling in Sudan in the late 19th century but I did find his name at Sedeinga and then again on the Temple from Kumma. Different dates admittedly but I would like to think of it as being the same person and that his visit to Sedeinga was brief as his attention to letter formation simply doesn’t have the gravitas given to those in Kumma.

There are plenty of other rogues in my gallery but no point in naming and shaming them all. They are long gone and belonged to a time when the discovery of these sites in the desert must have felt a world away. Perhaps that is why they felt the need to leave their mark – it was a sense of accomplishment at having reached the isolated site that they wanted to share with later travellers. They were essentially treating the stone monuments as a visitors book.

55 thoughts on “Scratching the Surface”

A spectacle.
Door knocker on the house of Medusa?
Chocolate box London.
A view from the bridge.
Fake views.
Giddy with brick happiness.
Whatever the collective noun is for no longer loved Christmas trees… the sight breaks my heart every year.
Arriving into London Bridge
The red barn. 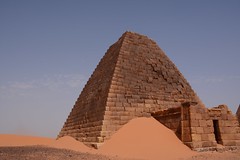 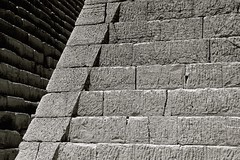 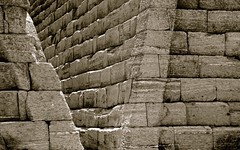 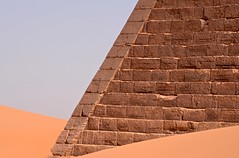 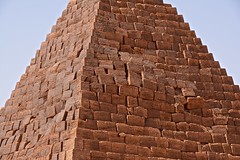